We were commissioned by Newcastle City Council to produce a replica of a roman altar that had been found on the bed of the River Tyne. The replica, hand-carved, lettered and painted, was placed on a pad stone of the new cobbled market area as as to appear to be lying on the river bed

Following an extensive fire which destroyed much of the building, the stacks had shattered as a result of the intense heat. One stack was replaced entirely, and the remaining four were either dismantled and rebuilt, or indented with new matched stone

New cills, jambs and mullions in Oxfordshire ironstone were worked on-site to replace the badly-deteriorated originals. Extensive compound repairs were also carried out in a colour-matched lime mortar. Finally, new York stone steps to the main entrance were built to replace the badly-eroded existing

We hold carving demonstrations and classes for children and adults in schools, colleges, and heritage craft fairs across the north-east and North Yorkshire

Dates will be added to our News page here 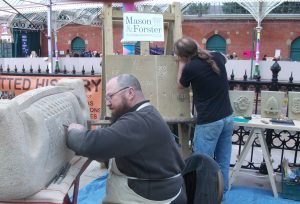